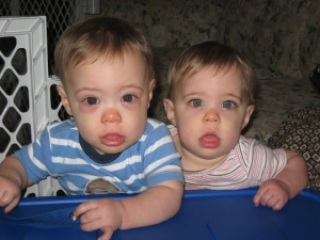 I have been told that usually there is a dominant twin. With this insight, I have been watching omi and Ti interact to see if I could spot the “bossy” one. Yesturday as I was watching them I realized something. They both have dominant personalities, but it comes out in different ways. It comes out in the male and female roles. If Naomi wants something Titus has or wants Titus to do something, she screams and sqwacks, and will sometimes resort to wacking him if screaming or sqwacks do not work. On the other hand, if Titus wants something Naomi has or wants her to move he man handles her. He sits on her, wraps his arms around her and trys to grab what she has. I do think Omi being the girl, will natural try and control Ti, that’s natural women sin, part of the curse of the fall of creation. But that’s not to say that Ti doesn’t have his own way of controling the situation. This may change and reverse as the twins often do, but for now, that’s the perspective of watchful mama.

Naomi is a cuddle bug, she loves playing but will come back and get lovin often and then go back and play. She is very talkative when she gets comfortable with the people shes around. She is adventureous, the faster, higher, and wild the better. She is super ticklish, stubborn, and strongwilled. She’s not quite ready to walk, but she will stand by herself now and then. She has the kind of personaltiy where she will do things when she’s good and ready and not before then.

Titus will usually be found on, in, around, under anything he can climb. He is laid back but loves a good snuggle too. However, unlike Omi he will not be found staying long for snuggles in your arms. He’s way to busy for snuggling too long. He loves playing with trucks and trains, and banging anything together. You will also find him toddling around, using his new walking legs, which at times are still really tricky.

They are so different and we are thankful and excited to help them culitvate their different personalities!